Back in Form. > Where is your pain? > Whiplash Treatment 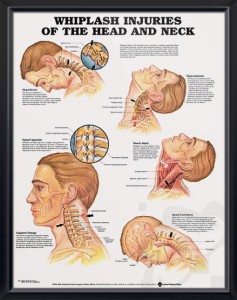 Whiplash is the term commonly used to describe a sudden movement of the head in any range of motion. It is commonly flexion and extension due to rear-end accidents but can also involve sideways movement and rotation.  Early whiplash treatment is essential to reduce the effects of many long term symptoms. You'd be surprised to know what it can cause, read on to find out more.

Whiplash is commonly associated with road traffic accidents. It can also be caused by sports such as riding, rugby, football to name a few, and even falling down or slipping over.  This causes damage and inflammation to the joints, ligaments, nerves and muscles as they are stretched and compressed on top of each other. In many episodes the brain which floats inside the skull can also be affected as it hits the inside of the skull. This can lead to a mild traumatic brain injury (mTBI). Frequently if you have one mTBI you are very likely to get another shortly after. See below for more details.

As you can imagine, with so many structures affected the symptoms can be diverse. These are neck pain, stiffness, headaches, dizzyness, visual problems, poor memory, co-ordination and balance issues, mood swings, depression and irritability to name a few. The symptoms of most whiplash injuries are assumed by many to settle in 6 months, however there are a large number of people who continue to have the above symptoms for much longer from even a seemingly mild trauma.

Research shows that a car accident of speeds of only 6mph is enough to cause joint pain. Most whiplash accidents occur above 20mph. Factors such as body position, head rest setting, neck circumference and litigation all affect the outcome in whiplash treatment.

Whiplash Treatment at Back in Form

At Back In Form we are skilled in treating the mechanical problems associated with Whiplash, such as injured joints and muscles. We are also trained to evaluate the function of the brain using specialised neurological tests to ascertain which areas have been affected. By giving exercises involving eye movements (optokinetics) we can rehabilitate the brain to reduce the effects on dizzyness, balance, mood and memory.

Whiplash is associated with an increased probability of developing long term degenerative neck problems. It is essential that early whiplash treatment is implemented to reduce your chance of early degeneration and limited mobility in later life.

You can be assured of a thorough appraisal here. I have suffered my own significant whiplash in the distant past and this has left me with early neck degeneration. So once you’ve had one, you’ll need careful and targeted rehabilitation to reduce the chances of recurrent problems. 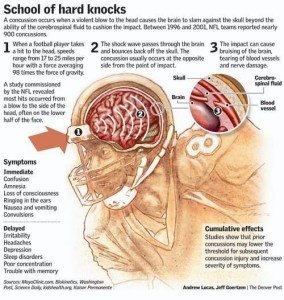 mTBI is due to the brain being bounced off the inside of the skull. In some cases this leads to concussion, in others you will feel dazed for a while. When the brain is hit it is simply bruised and areas of it can become inflamed. This leads to the nerves becoming tired quicker in some areas. Symptoms vary, depending on where the bruising was. For example a rear end shunt will bruise the front and back of the brain. This can lead to problems with the visual cortex so you may have trouble interpreting or focusing on objects. It also affects the front of the brain, where your thought processing and thinking occurs. So your personality can be affected, leading to inhibition issues, depression, irritability, poor social skills for example.

There are many manifestations of mTBI. By specifically manipulating it is possible to increase function in the weaker areas of the brain through their interconnections, this can also be enhanced using visual exercises where we can train certain areas of the brain in the same way that we train muscles to get stronger. The more you fire these connections the more chance you have of hard-wiring and strengthening function of the brain. This can restore the normal balance and help to reduce these symptoms. If you know someone who has had a significant trauma and has any of the following signs then they could need our help. Does someone you know get tired quickly, suffer academically, get depressed or is clumsy and suffer dizziness? Have they had a trauma where they have banged their head or had significant whiplash? Then they may need to be assessed to see if they have a weakness that can be helped.

We welcome you to ask for a free appointment when we can find out more and see whether you or your friend are suitable for care.

Chiropractic Treatment at Back in Form

Chiropractic Treatment at Back in Form You can be sure that at Back In Form we will look at the whole picture from the ground up, the head down and inside out. According to the General Chiropractic Council, chiropractic is “a health profession concerned with the diagnosis, treatment and prevention of mechanical disorders of the…

Sports Injury TreatmentSports injury treatment at Back In Form to speed recovery and enhance performance.At Back in Form we use a variety of techniques to maximise healing and consolidate recovery for sports injuries. We give high quality care and solutions designed to help you get the best results whatever your sports injury. Being a keen…

We use cookies to ensure that we give you the best experience on our website. If you continue to use this site we will assume that you are happy with it.AcceptPrivacy Policy