Back in Form. > Where is your pain? > Knee Pain

Most knee pain occurs because there is a problem with the function of the hip or foot. The knee can be injured when the Gluteal muscles of the hip are weak and the hip flexors are tight. Also weakness of the muscles in the foot can cause a dropped arch which will lead to a rolling in of the knee, this is compounded by weak Gluteal muscles.

At Back In Form we look at the whole body from the ground up and head down. We will assess whether foot problems are affecting your knees and look to strengthen the whole chain of joints from the ground up. Listed below are some of the most common knee problems we see regularly with descriptions below. 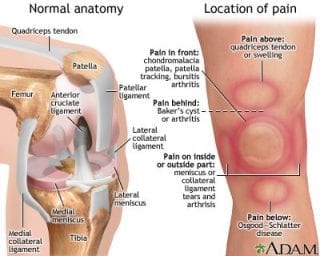 The cartilages or menisci are horseshoe shaped pads of cartilage that sit between the femur and tibia. They guide the motion of the joints and protect the joint surfaces. These can become inflamed or torn by repetitive stress and sudden forces that aren't controlled by the supporting muscles. So a common reason is either weakness of the surrounding muscles or fatigue leading to a failure of those muscles. Treatment is aimed at reducing damage as soon as possible by restoring the position (reducing) of the cartilages or the tear. ideally this should be done before weight bearing too much to avoid further damage. The aim then is to settle inflammation and improve feedback so that the muscles can start to stabilise the joint again. Taping helps with this stabilising. Following that strengthening can begin in stages to restore stability further. This would involve strengthening the hips and ankles as well as the knees.

In some cases the damage is too great to stabilise and then arthroscopy is needed to repair or remove the damaged tissues. We can advise in these cases of the best course of action and will keep your GP informed.

Sprains of the ligaments surrounding the knee or within it can be helped by using the same techniques as for meniscus injuries. The main concern is restoring stability to the knee. In severe cases such as ruptured anterior cruciate ligaments surgery may be required to help stabilise. However this is not always the case and it is possible to stabilise with exercises. The plan of management depends on your pain level, stability and response to treatment.

The patella tendon sits below the knee cap and attaches it to the tibia. It can become inflamed when there is excessive strain on it. A predisposing factor in this inflammation is an imbalance between the ilio-tibial band or ITB for short and the medial quadriceps muscles. The problem is usually associated once again with gluteal weakness. This can also lead to inflammation of the surface of the patella where it articulates with the femur. The result is pain on squatting behind or below the knee cap. Tenderness is also found when sat for a while so the problem is often called movie goers knee. or jumpers knee. Treatment is again aimed at strengthening the Gluteal muscles and the medial quadriceps muscles, improving feedback from the joint with taping and releasing tension in the muscles behind the knee. Orthotics may also have a role in preventing recurrences.

For the NICE guidelines in assessing knee pain follow this link

Chiropractic Treatment at Back in Form

Chiropractic Treatment at Back in Form You can be sure that at Back In Form we will look at the whole picture from the ground up, the head down and inside out. According to the General Chiropractic Council, chiropractic is “a health profession concerned with the diagnosis, treatment and prevention of mechanical disorders of the…

Sports Injury TreatmentSports injury treatment at Back In Form to speed recovery and enhance performance.At Back in Form we use a variety of techniques to maximise healing and consolidate recovery for sports injuries. We give high quality care and solutions designed to help you get the best results whatever your sports injury. Being a keen…

We use cookies to ensure that we give you the best experience on our website. If you continue to use this site we will assume that you are happy with it.AcceptPrivacy Policy